Home Reviews The Terror: A Bone-Chilling Adventure Into the Unknown

The Terror: A Bone-Chilling Adventure Into the Unknown 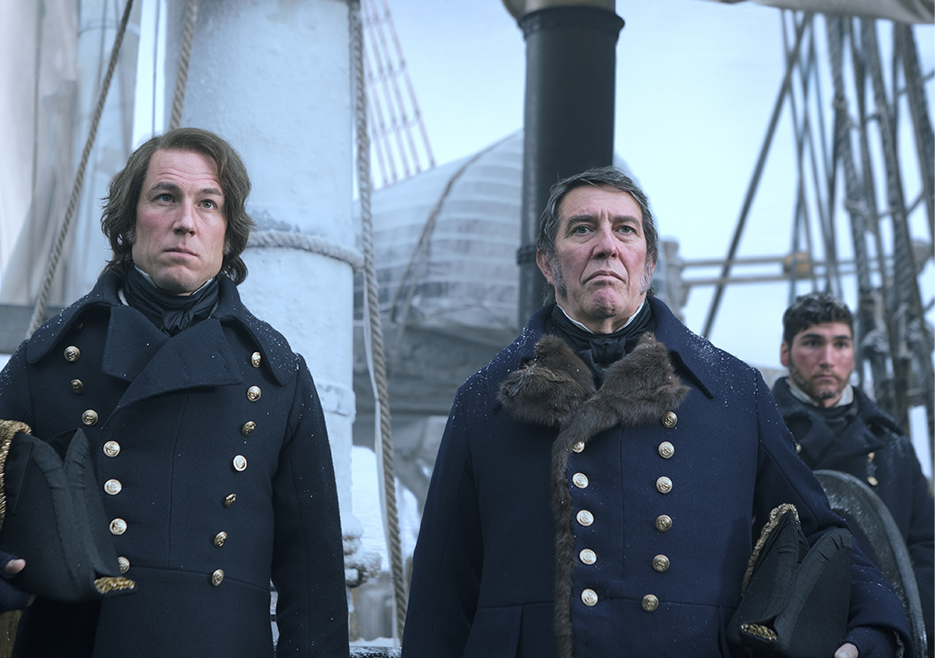 Executive producer Ridley Scott, director of iconic films that include Alien, Blade Runner and Gladiator, has woven together a riveting tale that will have viewers in anticipation — and confusion — from beginning to end.

Loosely based on the doomed Franklin Expedition of 1845, The Terror is a 10-part AMC series adapted from the historical fiction novel by Dan Simmons. The story is a unique fusion of period piece drama, and survival horror.   The premise centers on two real-life warships, the HMS Erebus and the HMS Terror, along with their crewmen, as they are sent on a perilous journey into uncharted lands. Led by two naval officers Francis Crozier, James Fitzjames and their Captain, Sir John Franklin, the two British vessels embark on an Arctic voyage in an attempt to find the Northwest Passage. Their ships become trapped in the frozen waters and the sailors soon realize that a cunning supernatural force is out to destroy them.

Show runners Soo Hugh and Dave Kajganich succeed in leaving audiences with a sense of adventure but also lingering feelings of eeriness as well as isolation. This is depicted through the injurious situations that the voyagers must inevitably endure throughout their journey, be it frostbite, emaciation, shortages of supplies or scurvy. Under these treacherous circumstances, they learn that they must come to face the harsh reality that safety is not guaranteed as the men are plagued with other fear-provoking factors such as lead poisoning and mutiny. They are eventually confronted with starvation, which leads them into an extremely terrifying choice for their own survival.

The scenery, lighting and costumes significantly add to the gothic horror along with the nineteenth century backdrop that symbolically portrays the story’s dramatic mood. Each of these layers adeptly set the stage for a truly groundbreaking story that creates tension throughout. With this comes the impending doom that metaphorically casts an imminent shadow over each of the sailors. The portrayal of the uncertainty that consumes the crewmen as they struggle to confront the unforgiving weather of the Arctic environment provides further complexity.

The Terror is effective in conveying the dread of its characters as it visually presents audiences with the barren landscapes of the Arctic. This haunting imagery alludes to the characters’ constant battle of the hostile and almost alien territories that they have entered into. There are many shocking revelations as the series progresses involving the character arch and plot progression, as well as the malicious forces at work–all contributing significantly to the surprising twists and turns.

Actor Jared Harris delivers an exceptional performance as the Naval Captain of the Terror, Francis Crozier. Harris makes an effort to present an empathetic character that embodies great authority while deeply confronted with struggles of insecurity, fear and alcoholism. Throughout the development of the show, Harris persuasively conveys Captain Crozier’s mental and physical deteriorations as he is faced with all manners of disaster. In addition, his character’s adamant nature becomes so great that he mistakenly comes across as a man consumed by obstinacy. Underneath it all, he is just as willing to find the passage as the rest of the crew is while trying to maintain a tenacious and dedicated attitude. Although Ciaran Hinds’ performance as Sir John Franklin and Tobias Menzies’ portrayal of James Fitzjames were both enjoyable on many different levels, Jared Harris’ Crozier was, for this reviewer, the highlight of the series.